Milton Fringe Festival
Presented by the Milton Art Bank and the CommUnity Zone
​
This event was an amazing success Be sure not to miss the next Fringe Festival in our valley. 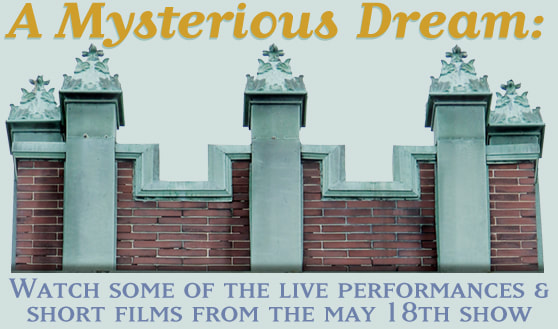 ​"Neighbors Helping Neighbors" is an opportunity to be awakened to the community and gather those who
have been isolated, marginalized, and put out. This experience was a night of celebrating
the community we’ve been looking for and hoping to build in the future. On May 18th, we all gathered at "Jim's Church"
on North 3rd Street for a night of food, drink, the arts, and awareness.  It was a great success.
Watch some of the live performances and short films that were
featured during the show on our youtube page. 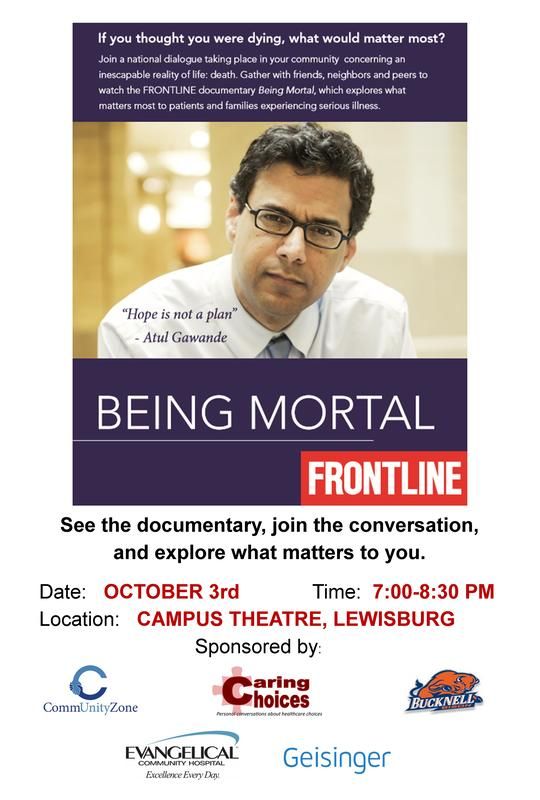 ​“Being Mortal” delves into the hopes of patients and families facing terminal illness. The film investigates the practice of caring for the dying and explores the relationships between patients and their doctors. It follows a surgeon, Dr. Atul Gawande, as he shares stories from the people and families he encounters. When Dr. Gawande’s own father gets cancer, his search for answers about how best to care for the dying becomes a personal quest.  The film sheds light on how a medical system focused on a cure often leaves out the sensitive conversations that need to happen so a patient’s true wishes can be known and honored at the end. ​

“Being Mortal” underscores the importance of people planning ahead and talking with family members about end-of-life decisions.  ​
Seventy percent of Americans say they would prefer to die at home, but nearly 70 percent die in hospitals and institutions. Ninety percent of Americans know they should have conversations about end-of-life care, yet only 30 percent have done so.
In February 2015, “Being Mortal” aired nationally on the PBS program “Frontline.” For more information about the film, visit http://www.pbs.org/wgbh/pages/frontline/being-mortal/. The film is adapted from Dr. Gawande’s 2014 nationally best-selling book of the same name.
More information about the book can be found here.  For more information about this free screening, contact Cynthia Peltier at peltier@bucknell.edu

Unity Gathering
Free and Open to ALL

The challenges facing us today are unprecedented. These great challenges
include climate change and the acceleration of technology – particularly AI and biotechnology. These things alone will change what it means to be human as our
cognitive abilities are matched and decision-making is automated. As these changes accelerate, we will fumble for new meaning in the world. That meaning will need to come from each other.
Putting an end to nationalistic and religious hostility – and other forms of divisive fake news – is too great a problem to be solved by one clever person. Instead, it must come from all of us.
None of the religions or nations of today are providing all the answers for all people. Morality, art, spirituality and creativity will be the only source of digging out.

This year, the 20th anniversary of the beginning of this event here in Lewisburg,Bucknell University students, staff, faculty and community members are planning on gathering together for a time of connecting with each other on a broader and more personal level than we have before. Our goal is to continue the conversations of unity beyond our time at Hufnagle Park because too often, the voices we listen to point out where we differ or are
opposed continue to try and divide us. Our goal is to remember that we are more alike than we are different.

At the Unity Gathering, we see people from all walks of life but when we have gathered together in the past, we often sit with those who are like us and we leave with people like us. This year, we want to encourage Bucknell Students and Community members to sit among each other. We want those of a diverse
faith to share together in conversation.

This year, we are inviting you because you are a unique and precious individual. We want the fullness of our community to be present for this event and also to help facilitate the conversations that will continue because of our coming together. Wherever you are, you can help make this dream of unity a reality. Let's show the future generations, and ourselves, that we can do better than be
at odds with each other.

“Unity is strength... when there is teamwork and collaboration, wonderful things can be achieved.”   -- Mattie Stepanek

​
Matthew Joseph Thaddeus Stepanek (July 17, 1990 – June 22, 2004), known as Mattie J.T. Stepanek, was an American poet (or as he wanted to be remembered as "a poet, a peacemaker, and a philosopher who played") who published seven best-selling books of poetry and peace essays. Before his death (at the age of 13) he had become known as a peace advocate and motivational speaker.

Groups hold unity rally for social, political justice
By Rick Dandes
rdandes@dailyitem.com
LEWISBURG — Lewisburg’s most visible progressive groups and leaders met Bucknell student groups for a night of solidarity Tuesday night, vowing to work together for social and political justice in the Valley and beyond.
Thunder and lightning prevented the rally from being staged at its normal venue, Hufnagle Park, but the bad weather outside Trout Auditorium on the Bucknell Campus couldn’t douse the good feeling inside of more than 200 engaged students and community stakeholders.
The rally, said Cynthia Peltier, cofounder of the CommUnity Zone is part of the Stop the Hate movement, calling for people of good will to act nonviolently as agents of healing in their communities. “To speak up for the victims of hatred,” she said, “and to raise a united voice against hate inspired violence.” The national rallies began the year after the hate crimes and killings of James Byrd and Matthew Shepard in 1998.
Groups addressing LGBT, hunger, climate change, mental health, victims of domestic violence (Transitions) and gun safety (Moms Demand Action) gave impassioned speeches about their core issues and implored others to join in and volunteer to help others.
Before the speeches began, the groups divided up and invited community members and others in the audience to learn more about specific issues.
Bucknell students Maya McKeever and Ralph Corbelle noted that among the student population, a certain percentage had what they called “food insecurity. That is, they had trouble affording nutritious food,” said McKeever. “You shouldn’t have to worry about such things. You should be here, as a student and not have to wonder about eating good food in this community.”
Shari Jacobson of Moms Demand Action, spoke about the national movement to enact laws that will help prevent gun violence. Moms is a grassroots movement, she said. “We’re moms. We get things done.”
Meanwhile, Peltier told the crowd, “It is no longer good enough to stand on the sidelines. We must be bold and act when we see inequities. And above all else, please vote. Do not throw your vote away.”
dailyitem-cnhi.newsmemory.com/